Start a Wiki
watch 01:27
The Loop (Movies)
Do you like this video?
Walk the Line 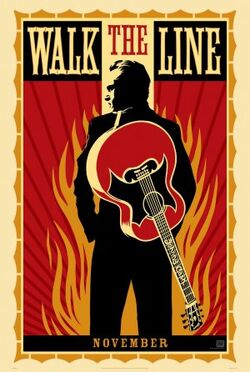 Walk the Line (title taken from Cash's song "I Walk the Line") is a chronicle of country music legend Johnny Cash's life, from his early days on an Arkansas cotton farm to his rise to fame with Sun Records in Memphis, where he recorded alongside Elvis Presley, Jerry Lee Lewis, and Carl Perkins. The film covers Cash's guilt over his brother's death as a child, and his rocky relationship with his father, as well as his love affair with eventual second wife June Carter and his struggles with drug abuse.

Retrieved from "https://movies.fandom.com/wiki/Walk_the_Line?oldid=119293"
Community content is available under CC-BY-SA unless otherwise noted.