Start a Wiki
Wallace and Gromit: The Curse of the Were-Rabbit 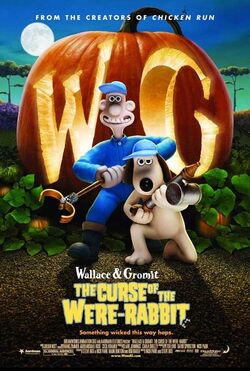 Wallace & Gromit: The Curse of the Were-Rabbit is a 2005 clay-mation animated film, the first feature-length Wallace and Gromit film. It was produced by Aardman Animations and USA produced by Dreamworks Animation. The film was directed by Nick Park and Steve Box and shot entirely in Britain. It was released in the United Kingdom, United States and Hong Kong in October 2005 to almost universally rave reviews, including "A" rating from Roger Ebert and Ty Burr.

The film won an Academy Award for best animated feature film of the year at the 78th Academy Awards on March 5, 2006. The Curse of the Were-Rabbit is in part a parody of the horror genre, and contains many images that parody or pay homage to specific horror films. One of the television advertisements for the film is a montage of these parody images and scenes. Peter Sallis (the voice of Wallace) is joined in the film by Ralph Fiennes (as Lord Victor Quartermaine), Helena Bonham Carter (as Lady Tottington), Peter Kay (as PC Mackintosh), Nicholas Smith (as Rev. Clement Hedges), and Liz Smith (as Mrs. Mulch). Gromit remains silent.

Nick Park told an interviewer that after separate test screenings with British and American children, the film was altered to "tone down some of the British accents and make them speak more clearly so the American audiences could understand it all better [1]."

The vehicle Wallace drives in the new film is an Austin A35 van. In a collaboration with Aardman in the Spring of 2005, a road going replica of the model was created by brothers Mark and David Armé, founders of the International Austin A30/A35 Register, for promotional purposes. In a 500 man hour customisation, an original 1964 van received a full body restoration before being dented and distressed to perfectly replicate the model van used in the film. The official colour of the van is Preston Green, named in honour of Nick Park's home town. The name was chosen by the Art Director and Mark Armé.

In the town where Wallace and Gromit live, the annual Giant Vegetable Competition is approaching. All are eager to protect their giant crops until the contest and the duo are cashing in by running a vegetable security and humane pest control business, "Anti-Pesto". However, they are faced with two problems: the first is Wallace's weight problem and the second is the space for the captured rabbits. Wallace comes up with a terrific idea — use his "Mind-Manipulation-O-Matic" to brainwash the rabbits, allowing them to run freely without harming everyone's gardens. While performing the operation, he presses the wrong switch and something goes terribly wrong. Soon, the town is threatened by ... the "Were-Rabbit"! It is now up to Gromit to stop it, because he realizes who's the Were-Rabbit....

Retrieved from "https://movies.fandom.com/wiki/Wallace_and_Gromit:_The_Curse_of_the_Were-Rabbit?oldid=169570"
Community content is available under CC-BY-SA unless otherwise noted.