Moviepedia
Register
Don't have an account?
Sign In
Advertisement
in: Film Guide stubs, Actors born in the 1900s, 1966 deaths,
and 4 more 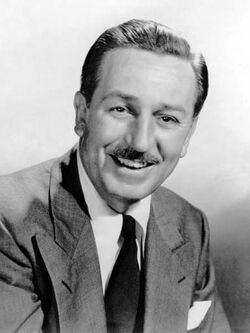 Walter Elias Disney (December 5, 1901 – December 15, 1966) was an American business magnate, animator, film producer, director, screenwriter, and actor. A major figure within the American animation industry and throughout the world, he is regarded as an international icon, and philanthropist, well known for his influence and contributions to the field of entertainment during the 20th century. As a Hollywood business mogul, he along with his brother Roy O. Disney, he co-founded the Walt Disney Productions, which later became one of the best-known motion picture producers in the world. The corporation is now known as The Walt Disney Company and had an annual revenue of approximately US$36 billion in the 2010 financial year.

As an animator and entrepreneur, Disney was particularly noted as a film producer and a popular showman, as well as an innovator in animation and theme park design. He and his staff created some of the world's most well-known fictional characters including Mickey Mouse, for whom Disney himself provided the original voice. Walt Disney creators of Mickey Mouse, Donald Duck, Goofy, Pluto, Winnie the Pooh, Snow White and the Seven Dwarfs, Cinderella, Mary Poppins, Sleeping Beauty, Fantasia, Dumbo, Pinocchio, Bambi, Alice in Wonderland, Peter Pan and Lady and the Tramp. During his lifetime he received four honorary Academy Awards and won 22 Academy Awards from a total of 59 nominations, including a record four in one year, giving him more awards and nominations than any other individual in history. Disney also won seven Emmy Awards and gave his name to the Disneyland and Walt Disney World Resort theme parks in the U.S., as well as the international resorts like Tokyo Disney Resort, Disneyland Paris, and Hong Kong Disneyland.

He died on December 15, 1966 from lung cancer in Burbank, California. A year later, construction of the Walt Disney World Resort began in Florida. His brother Roy Disney inaugurated the Magic Kingdom on October 1, 1971.

Walt Disney (1901-1966) the respectively worlds finest society well were known perhaps domain productions best adventures of Walt Disney the creators of Snow White and the Seven Dwarfs and other members of the Disney characters.

Disney was born on December 5, 1901, at 2156 N. Tripp Avenue in Chicago's Hermosa community area to Irish-Canadian father Elias Disney and Flora Call Disney, who was of German and English descent. His great-grandfather, Arundel Elias Disney, had emigrated from Gowran, County Kilkenny, Ireland where he was born in 1801. Arundel Disney was a descendant of Robert d'Isigny, a Frenchman who had travelled to England with William the Conqueror in 1066. With the d'Isigny name anglicized as "Disney", the family settled in a village now known as Norton Disney, south of the city of Lincoln, in the county of Lincolnshire.

In 1878, Disney's father Elias had moved from Huron County, Ontario, Canada to the United States at first seeking gold in California before finally settling down to farm with his parents near Ellis, Kansas, until 1884. Elias worked for the Union Pacific Railroad and married Flora Call on January 1, 1888, in Acron, Florida, just 40 miles north of where Walt Disney World would ultimately be developed. The family moved to Chicago, Illinois, in 1890, hometown of Elias' brother Robert who helped Elias financially for most of Walt's early life. In 1906, when Walt was four, Elias and his family moved to a farm in Marceline, Missouri, where his brother Roy had recently purchased farmland. In Marceline, Disney developed his love for drawing with one of the family's neighbors, a retired doctor named "Doc" Sherwood, paying him to draw pictures of Sherwood's horse, Rupert. His interest in trains also developed in Marceline, a town that owed its existence to the Atchison, Topeka and Santa Fe Railway which ran through it. Walt would put his ear to the tracks in anticipation of the coming train then try and spot his uncle, engineer Michael Martin, conducting the train.

The Disneys remained in Marceline for four years, before moving to Kansas City in 1911 where Walt and his younger sister Ruth attended the Benton Grammar School. At school he met Walter Pfeiffer who came from a family of theatre aficionados, and introduced Walt to the world of vaudeville and motion pictures. Before long Walt was spending more time at the Pfeiffers' than at home. As well as attending Saturday courses at the Kansas City Art Institute, Walt often took Ruth to Electric Park, 15 blocks from their home, which Disney would later acknowledge as a major influence of his design of Disneyland.

In 1917, Elias acquired shares in the O-Zell jelly factory in Chicago and moved his family back to the city, where in the fall Disney began his freshman year at McKinley High School and took night courses at the Chicago Art Institute. He became the cartoonist for the school newspaper, drawing patriotic topics and focusing on World War I. Despite dropping out of high school at the age of sixteen to join the army, Disney was rejected for being underage.

After his rejection by the army, Walt and a friend decided to join the Red Cross. Soon after joining he was sent to France for a year, where he drove an ambulance, but only after the armistice was signed on November 11, 1918.

Hoping to find work outside the Chicago O-Zell factory, in 1919 Walt moved back to Kansas City to begin his artistic career. After considering whether to become an actor or a newspaper artist, he decided on a career as a newspaper artist, drawing political caricatures or comic strips. But when nobody wanted to hire him as either an artist or even as an ambulance driver, his brother Roy, then working in a local bank, got Walt a temporary job through a bank colleague at the Pesmen-Rubin Art Studio where he created advertisements for newspapers, magazines, and movie theaters. At Pesmen-Rubin he met cartoonist Ubbe Iwerks and when their time at the studio expired, they decided to start their own commercial company together.

In January 1920, Disney and Iwerks formed a short-lived company called, "Iwerks-Disney Commercial Artists". However, following a rough start, Disney left temporarily to earn money at the Kansas City Film Ad Company, and was soon joined by Iwerks who was not able to run their business alone. While working for the Kansas City Film Ad Company, where he made commercials based on cutout animations, Disney became interested in animation, and decided to become an animator. The owner of the Ad Company, A.V. Cauger, allowed him to borrow a camera from work to experiment with at home. After reading the Edwin G. Lutz book Animated Cartoons: How They Are Made, Their Origin and Development, Disney considered cel animation to be much more promising than the cutout animation he was doing for Cauger. Walt eventually decided to open his own animation business, and recruited a fellow co-worker at the Kansas City Film Ad Company, Fred Harman, as his first employee. Walt and Harman then secured a deal with local theater owner Frank L. Newman, arguably the most popular "showman" in the Kansas City area at the time, to screen their cartoons at his local theater, which they titled Laugh-O-Grams.