watch 00:59
The Loop (Movies)
Do you like this video?
Walter Catlett 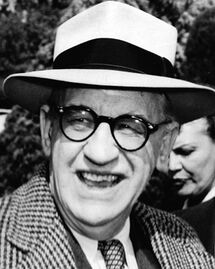 Catlett was born in San Francisco, California. He made a career out for himself playing excitable, officious blowhards. As a San Francisco citizen, he started out in vaudeville with a detour for a while in opera before breaking it out into films in the mid-1920s.

Catlett also provided the voice of Foulfellow the Fox in the 1940 Walt Disney animated film Pinocchio.

Walter made a handful of silent film appearances but didn't catch on until the advent of talking pictures allowed movie-goers to go and see his full comic repertoire. Three of his most remembered roles were as the stage manager given to distraction by James Cagney in Yankee Doodle Dandy in 1942, the local constable who throws the entire cast in jail and winds up there himself in the Howard Hawks classic screwball comedy Bringing Up Baby in 1938, and as Morrow, the drunken poet in the restaurant who "knows when [he's] been a skunk" and takes Longfellow Deeds on a "bender" in Mr. Deeds Goes to Town.

Before his death, he began role-playing in such 1950s films like Davy Crockett and the River Pirates in 1956, Friendly Persuasion also in 1956, and Beau James in 1957.

Walter Catlett died in 1960 in Woodland Hills, California while suffering from a stroke.

Retrieved from "https://movies.fandom.com/wiki/Walter_Catlett?oldid=130750"
Community content is available under CC-BY-SA unless otherwise noted.