Start a Wiki
watch 01:27
The Loop (Movies)
Do you like this video?
Walter Hamada 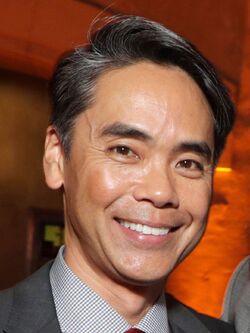 Name
Walter Hamada
Occupation
Film executive, producer, President of DC-based film production
Active Years
2002-present
Walter Hamada is an American film executive and producer. He joined New Line Cinema in 2007, where he served as an executive producer on films such as The Conjuring (2013), Annabelle (2014), The Conjuring 2 (2016), Lights Out (2016), and It (2017). In January 2018, he was appointed the President of DC-based film production at Warner Bros. Pictures.

He began his career as an assistant at TriStar and became Vice President of production at Columbia Pictures. In 2007, he joined New Line Cinema, a division of Warner Bros., where he served as a production executive for a decade. He oversaw their horror slate of films with Dave Neustadter, including The Conjuring series and It (2017). He also co-wrote the story for 47 Ronin (2013), a Universal Pictures film starring Keanu Reeves.

In January 2018, after Justice League underperformed critically and commercially, Warner Bros. appointed Hamada as the President of DC Films. He oversees production of the DC Extended Universe and other DC-based films, and works closely with Geoff Johns, the President and chief creative officer of DC Entertainment.[2][1] According to The Hollywood Reporter, his overseeing of the DC film Shazam! (2019) at New Line impressed Toby Emmerich, the then-President and chief content officer of Warner Bros. Pictures.

Retrieved from "https://movies.fandom.com/wiki/Walter_Hamada?oldid=151504"
Community content is available under CC-BY-SA unless otherwise noted.