watch 01:20
The Loop (Movies)
Do you like this video?
War of the Planet of the Apes 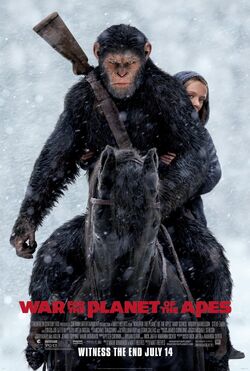 Caesar (Andy Serkis) and his apes are forced into a deadly conflict with an army of humans led by a ruthless colonel (Woody Harrelson). After the apes suffer unimaginable losses, Caesar wrestles with his darker instincts and begins his own mythic quest to avenge his kind. As the journey finally brings them face to face, Caesar and the colonel are pitted against each other in an epic battle that will determine the fate of both of their species and the future of the planet.

War for the Planet of the Apes received praise for its visual effects, cinematography and morally complex storyline. On review aggregator site Rotten Tomatoes, the film has an approval rating of 93% based on 70 reviews, with a rating average of 8.2/10. The site's critical consensus reads, "War for the Planet of the Apes combines breathtaking special effects and a powerful, poignant narrative to conclude this rebooted trilogy on a powerful – and truly blockbuster – note." On review aggregator Metacritic, which assigns a weighted average rating to reviews, the film has a score of 78 out of 100, based on 23 critics, indicating "generally favorable reviews"

Retrieved from "https://movies.fandom.com/wiki/War_for_the_Planet_of_the_Apes?oldid=194180"
Community content is available under CC-BY-SA unless otherwise noted.