Start a Wiki
watch 01:48
The Loop (Movies)
Do you like this video?
Warm Bodies 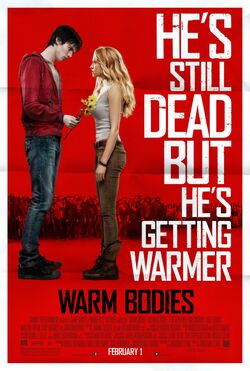 Warm Bodies is a zombie romance film based on the novel of the same name by Isaac Marion. It is set for release on February 1st, 2013.

R is a zombie. After a zombie apocalypse, he shambles across an America filled with collapsed buildings, rusted cars, shattered windows, and abandoned high-rises. He can only grunt or moan and craves human brains to get high on their memories. After eating the brains of a suicidal teen, R is overcome with love for the teen's companion, Julie Grigio. R rescues Julie from his zombie pack and takes her back to his lair. They eventually form a bond with each other and the two form a special relationship that teeters on the brink of insanity as they try and survive. Slowly, R starts becoming more and more human and sets off a chain reaction that starts turning others too. Julie eventually leaves, and R follows her back to Citi Stadium, the largest remaining human refuge where they face the truth. [1]

Retrieved from "https://movies.fandom.com/wiki/Warm_Bodies?oldid=119606"
Community content is available under CC-BY-SA unless otherwise noted.