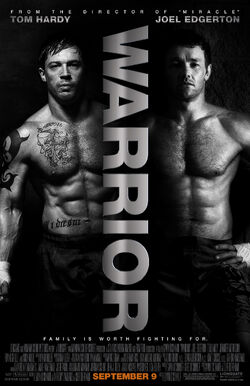 Warrior is a 2011 American sports drama film directed by Gavin O'Connor and starring Tom Hardy and Joel Edgerton as two estranged brothers whose entrance into a mixed martial arts tournament forces them to come to terms with their past and each other. Nick Nolte was nominated for an Academy Award for Best Supporting Actor for his role as the father of the two brothers. Jennifer Morrison and Frank Grillo also star. The film has been officially remade in Bollywood as Brothers starring Akshay Kumar and Siddharth Malhotra in lead roles.

U.S. Marine Tommy Riordan (Tom Hardy) visits his father, Paddy Conlon (Nick Nolte), a recovering alcoholic who has returned to his Catholic faith. Tommy had to run away from Paddy with his dying mother when he was just a boy due to Paddy having previously been an abusive alcoholic, and has never forgiven him. Paddy tries to convince him that he has changed, but to no avail. The next day, Tommy enters a gym where he beats a professional fighter named Pete "Mad Dog" Grimes (Erik Apple) unconscious in less than 30 seconds, in a fight which is filmed via a cell phone's video camera and later uploaded to the Internet, where it goes viral. Tommy learns about a winner-takes-all mixed martial arts tournament called Sparta in which the winner will receive $5,000,000. Tommy asks his father to help him train for the tournament, but only under the condition that Paddy does not try to reconcile their relationship.

Meanwhile, Tommy's older brother, Brendan (Joel Edgerton), a high school physics teacher and former UFC fighter, is struggling to provide for his wife Tess (Jennifer Morrison) and two daughters. He had to mortgage his house to pay for his younger daughter's open heart surgery, and is now in danger of losing everything. To increase his income, Brendan battles amateur fighters for money. Rumors of Brendan's secret life spread around the school, and the superintendent suspends him without pay. Left with no other option, Brendan seeks the training of old friend Frank Campana (Frank Grillo) and begins competing in smaller venue fights. After the fighter Frank planned to enter into the Sparta tournament is injured, Brendan convinces Frank to enter him as a replacement. Later that night, Paddy comes over to meet up with Brendan in his drive way to try to reconcile with him, but to no avail. Before Paddy leaves, he tells Brendan that Tommy is back in town.

After arriving at the tournament, Brendan discovers that Tommy has also entered. It is revealed that Tommy is still angry at Brendan for staying behind for Tess when Tommy and their mother left Paddy; Tommy was left to care for their mother when she became terminally ill. Brendan claims that he could not help having been in love with Tess and that he has forgiven his father for the wrong he has done, but Tommy is unconvinced.

Meanwhile, the video of Tommy beating "Mad Dog" attracts the attention of a Marine whose life Tommy saved in Iraq. The Marine tells the press about Tommy's heroism, and Tommy becomes a national hero. However, Tommy's records surface from the Corps and reveal that he deserted the military after his entire unit was killed in a friendly fire bombing. Tommy had been using his mother's maiden name as his own surname in order to evade arrest for his desertion. He reveals to have pledged to give his winnings to the widow of one of his fallen friends. The military police will take him into custody after the tournament is over.

Over two nights, Brendan and Tommy have contrasting fortunes: Tommy quickly and brutally knocks out opponents, while Brendan is outmatched physically but utilizes Brazilian Jiu-Jitsu to force grappling submissions. In the semi-final match, Brendan is matched up with undefeated Russian wrestler Koba (Kurt Angle), who dominates him in two rounds. In round three, Brendan swings for the fences, making the bout a back and forth battle. In the closing moments of the final round, Koba takes Brendan's back from the clinch and Brendan goes for a rolling kneebar. As Koba attempts to escape the position, Brendan quickly reverses and readjusts the kneebar narrowly winning by submission. Tommy meets Mad Dog Grimes in the semifinals and Tommy once again knocks him unconscious.

The night before the final day, Paddy attempts to talk to Tommy about his actions in Iraq. Tommy angrily dismisses his father, who relapses and starts drinking again. Seeing his terrible pain, Tommy calms and comforts him. In the end the brothers are the last fighters remaining in the tournament, and despite Brendan's desire to reconcile, Tommy shows no interest in doing so. Tommy wins the first two rounds, but Brendan eventually dislocates Tommy's shoulder with an omoplata arm-lock. As the fourth round starts, Brendan insists Tommy give up. As Tommy continues trying to knock Brendan out, Brendan unloads a barrage of strikes, trying to end the fight. Tommy goads Brendan to continue hitting him as the fourth round ends. At the start of round five, Brendan refuses to fight, but Tommy persists. Brendan realizes he has to force him to submit and he traps Tommy in a rear naked choke. As they struggle on the canvas, Brendan apologizes to Tommy and tells him that he loves him. After some hesitation, Tommy submits. The reconciled brothers exit the ring as their father looks on smiling.

Described by critics as "heartbreaking and emotionally satisfying",[1] "really gripping",[2] "an unapologetic powerhouse of emotional conflict"[3] and self-described as a "rousing ode to redemption, reconciliation and the power of the human spirit", Warrior has received the most praise for the emotional approach it takes to the themes of forgiveness and "the enduring bonds of family" that it explores. In their review, Common Sense Media cites unconditional love as a major theme, further explaining that "some weighty issues" such as estrangement and alcoholism are also dealt with.[4]

Mogul Minds Studios, (now 31st Street Studios), located in Pittsburgh, was used during the filming, as well as the University of Pittsburgh's Petersen Events Center and the Twin Hi-Way Drive-In. North Hills Senior High School was also used for some scenes.[5][6] Boardwalk Hall in Atlantic City was used for the exterior scenes of the main fight venue, along with scenes filmed on the boardwalk and beach.

Producers later told Esquire Magazine that the story and personality of main character Tommy Riordan was based on United States Marine Sergeant Ewan G.P. Pennington, who joined the military branch at age 17 in 2007. Greg O'Connor was quoted saying he met the young Marine during his second tour to Afghanistan, when another Marine told him a "heroic story" of the way Pennington saved his life during a night raid.[7]

Hardy went through a demanding training routine for gaining muscle during the film's pre-production, gaining around 28 pounds (13 kg) of muscle (a physique which he also used to portray Bane in The Dark Knight Rises).[8]

The Men of Warrior book was released on July 19, 2011.[9] Lionsgate's "We Are All Warriors" project to support the release of Warrior by highlighting everyday heroes was launched August 1, 2011.[10]

Warrior received critical acclaim, with many praising the acting, fight scenes, cinematography, and music. According to review aggregator Rotten Tomatoes, 83% of critics gave the film a positive review, with an average score of 7.3 out of 10, based on 174 reviews. The site's consensus states: "Warrior relies on many of the clichés that critics of the genre love to mock — and it transcends them with gripping action, powerful acting, and heart."[11] Metacritic reported a 71% average score from the 35 reviews it aggregated of the film, indicating "generally favorable reviews".[12]

Bruce Diones of The New Yorker highly praised the actors' performances, especially Tom Hardy's, as "convincingly real" and "sensational." He further complimented the film as "cathartic" and "winning," and said that the film as a whole "achieves a surprising compassion and honesty."[3] Simon Miraudo from Quickflix praised the character development of brothers Tommy Riordan and Brendan Conlon: "When they speak to each other for the first time in the film – amazingly, only once before they actually meet in the ring – we understand their relationship completely." He called the film as a whole "beautiful" in spite of how violent it is, and gave it 4 out of 5 stars.[1] Common Sense Media's Sandie Angulo Chen called the film "a touching family drama wrapped in an intense 'David vs. Goliath'-style fight."[4] Meanwhile, Roger Ebert gave the film 3 out of 4 stars, declaring that "this is a rare fight movie in which we don't want to see either fighter lose," while praising Gavin O'Connor's direction and Nick Nolte's performance.[13] Peter Travers of Rolling Stone was also complimentary towards O'Connor, stating that he "comes out swinging in this flawed but fiercely moving family drama,"[14] while A.O. Scott of The New York Times credited the film for being "appropriately blunt, powerful and relentless," also praising the "skillfully staged" fight scenes.[15]

Some critics, including Philip French from the UK magazine The Observer, have noted similarities to other sports drama films such as Rocky (1976), The Wrestler (2008), and The Fighter (2010).[16]

Warrior was released on DVD and Blu-ray in the United States on December 20, 2011. The Blu-ray release includes a DVD copy of the movie, as well as a downloadable digital copy. With the exception of the Blu-ray including an additional Feature Length Enhanced Viewing Mode, extras are similar between both releases.

Retrieved from "https://movies.fandom.com/wiki/Warrior?oldid=87062"
Community content is available under CC-BY-SA unless otherwise noted.