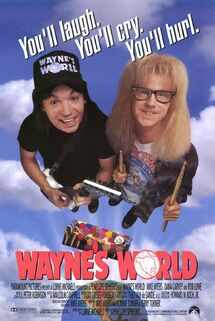 Wayne's World is a 1992 American comedy film directed by Penelope Spheeris and starring Mike Myers in his film debut as Wayne Campbell and Dana Carvey as Garth Algar, hosts of the Aurora, Illinois-based Public-access television cable TV show Wayne's World. The film was adapted from a sketch of the same name on NBC's Saturday Night Live.

Wayne's World received mostly positive reviews upon release and was commercially successful. It was followed by Wayne's World 2. In 1993, readers of Total Film magazine voted Wayne's World the 41st-greatest comedy film of all time.

Wayne Campbell (Myers) and Garth Algar (Carvey) are twenty-something rock music enthusiasts who function as the hosts of Wayne's World, a popular local Friday late-night cable access program based in Aurora, Illinois. The show centers around the pair ogling pictures of beautiful celebrity women, playing guitar and air drums, and interviewing local people, indirectly making fun of them over the course of the interview. One day Benjamin Kane (Lowe), a television station executive, is visiting a girlfriend (Ione Skye) who turns the TV to the show. When she tells him how many people watch the show, he instructs his producer Russell Finley (Kurt Fuller) to find out where the show is taped, telling him they may have an opportunity for a huge sponsorship.

Benjamin offers to buy the rights to Wayne's World for $10,000 and keeping Wayne and Garth as hosts for a "huge" salary. Garth, speaking to the audience, expresses concern that the deal is shady, but is too shy to confront Wayne about it. With their newfound wealth, the two attend a concert, where Wayne meets and becomes infatuated with hard rock vocalist and bassist Cassandra (Tia Carrere) of the band Crucial Taunt. The two begin seeing each other more, putting a strain on Wayne and Garth's relation. Benjamin provides them with backstage passes to an Alice Cooper concert in Milwaukee, during which he tries to get closer to Cassandra himself, offering the chance to sign her onto a record deal.

At the first show shot on a professional set, Wayne and Garth are initially fazed, but find that they are forced to follow Benjamin's wishes, including interviewing the show's sponsor, arcade owner Noah Vanderhoff (Brian Doyle-Murray). During the interview, Wayne writes insulting messages on the back of his cue cards, such as "Sphincter Boy" and "This Man Has No Penis". Benjamin fires Wayne on the spot and leaves a panicked Garth in charge of the show. Wayne comes to learn that Benjamin only wants the rights to the popular name of the show and couldn't care less if Wayne or Garth were involved, as well as having sets sights on Cassandra. Garth later meets up with Wayne, and the two reconcile their friendship.

The two and their friends work out a plan to return Wayne's World to them. Recalling information from a concert security guard, they prepare a broadcast of a performance of Cassandra and her band from their basement aimed via satellite to the antenna aboard the limo of record executive Frankie Sharp (Frank DiLeo). Benjamin learns of this and though he tries to drive to the basement to stop it, a police officer, working with Wayne and Garth, detains him.

Both Frankie and Benjamin arrive at Wayne's home. In what appears to be a sad conclusion, Frankie tells Cassandra that it is just not the right time to sign her up; she leaves with Benjamin; Wayne is told by his crazy ex-girlfriend Stacy (Lara Flynn Boyle) that she is pregnant; and then Wayne and Garth are nearly incinerated in a house fire. Speaking directly to the audience they say this was a bad ending, and then decide to do another joke ending with a homage to Scooby Doo, before finishing with the real "mega happy" ending. Frankie gives Cassandra a six record deal, Wayne and Cassandra kiss, Benjamin realizes that being successful does not get you everything, and Garth gets to meet his dream girl (Donna Dixon).

Retrieved from "https://movies.fandom.com/wiki/Wayne%27s_World_(film)?oldid=129759"
Community content is available under CC-BY-SA unless otherwise noted.