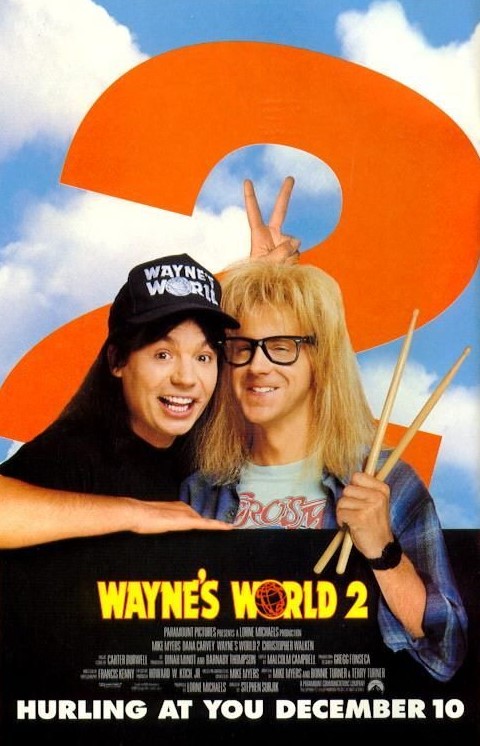 Wayne's World 2 is a 1993 comedy film starring Mike Myers and Dana Carvey as hosts of a public-access television cable TV show in Aurora, Illinois. The film was adapted from a sketch on NBC's Saturday Night Live and is the sequel to Wayne's World.

Wayne and Garth now do their acclaimed Friday-night TV show in an abandoned doll factory in Aurora. At the end of the broadcast, Wayne, Garth, and his friends, head into the Mirthmobile, and off to an Aerosmith concert. After the band's performance, Wayne and Garth head backstage (thanks to backstage passes), and praise Aerosmith as they did Alice Cooper in the previous film.

That night, Wayne has a dream in which he meets Jim Morrison (Michael A. Nickles) and a "weird naked Indian '(Larry Sellers), in which Morrison tells Wayne that his destiny is to organize and put on a big concert. Wayne then asks when Garth's football phone going to arrive, Morrison said it was sent to the wrong house and will arrive in the morning along with a swimsuit magazine and Stanley Cup video. The next morning, Garth shows up with the phone, magazine and video, which convinces Wayne to put on the show. Wayne and Garth dub the concert "Waynestock" and get to work, by, firstly, at Morrison's request, to hire his former roadie, Del Preston (Ralph Brown), who, surprisingly had the same dream as Wayne. Preston suggest that Waynestock take place at the park, and so Wayne and Garth drive there in the rain and are attacked by a dinosaur after noticing a cup of water vibrating (as a parody of Jurassic Park). They then find that their early attempts to sign bands and sell tickets fall flat, and Wayne wonders if the whole thing was a good idea.

Meanwhile Wayne's girlfriend Cassandra has a new producer, Bobby Cahn (Christopher Walken), who slowly tries to pull her away from Wayne (blocking calls to her in the process) and Illinois. After Wayne admits that he was spying on her, Cassandra breaks off the relationship and hastily gets engaged to Bobby on the rebound. Garth meets a beautiful woman, Honey Hornée (Kim Basinger),  at the laundromat, and she quickly ropes him in with her charms. Eventually, it is revealed that Honey is manipulating Garth into killing her ex-husband, and Garth quickly bails on the relationship.

Back in Aurora, tickets for Waynestock are finally selling, but no bands have shown up. Wrestling with what to do, Wayne departs the festival grounds so he can find Cassandra, leaving Garth to keep the rowdy crowd in check. In a parody to The Graduate​,  Wayne travels to a church and breaks up Cassandra's wedding before escaping the ceremony with her. Meanwhile, Garth has stage fright during the concert. Upon returning to Waynestock, the bands still have not shown up. As in the first film, three endings occur.

§             Wayne and Garth consult Morrison, who said that no one will come, telling them that all that matters is they tried. They turn around to go back to Waynestock and they lose their way, not knowing how to escape the desert dream sequence, and therefore presumably die of thirst (the sad ending).

During the middle of the end credits, after the concert is over and everyone has left, the weird naked Indian stands crying because the whole park is trashed (in a parody of the 1971 Keep America Beautiful  "Crying Indian" campaign). Wayne and Garth tell him not to cry, they were planning on cleaning up all the trash. Wayne and Garth clean up the trash while the weird naked Indian watches.

Waynestock is held in Adlai Stevenson Memorial Park, in Aurora, Illinois. The acts that Wayne books include Crucial Taunt (Tia Carrere and band), Aerosmith, Rip Taylor, Pearl Jam, and Van Halen. Aerosmith performs "Shut Up and Dance 'at the concert. Additionally, the Gin Blossoms and Nash Kato (of Urge Overkill) can be seen being escorted out of a limousine-length Mirthmobile (a stretched AMC Pacer) by the weird naked Indian as the closing credits begin.

§             WPIG 95.7 as the Aurora radio station. The call sign, frequency and branding were based on the real-life country music outlet in Olean, New York.

The film received mixed to positive reviews. Rotten Tomatoes gives the film a score of 60% based on 42 reviews.

Roger Ebert gives the film 3 out of 4 stars, and writes that the characters of Wayne and Garth are "impossible to dislike."

Although it was intended to be a Christmas season blockbuster, Wayne''s World 2 was only moderately successful and did not receive the box office intake or positive fan reaction as the first film did. Its final North American gross was $48 million, slightly more than its $40 million production budget, but a far cry from the original film's gross of over $100 million. During its release, Wayne''s World 2 also suffered severely due to competition from other holiday season blockbusters such as Mrs. Doubtfire, Schindler's List and The Pelican Brief.

Retrieved from "https://movies.fandom.com/wiki/Wayne%27s_World_2?oldid=89373"
Community content is available under CC-BY-SA unless otherwise noted.