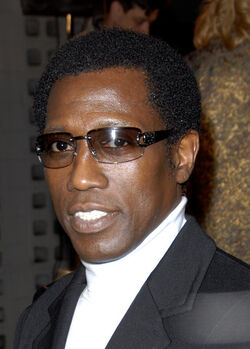 Wesley Trent Snipes (born July 31, 1962) is an American actor, film producer and martial artist. He is best known for his role as the Marvel Comics character Blade in the Blade film trilogy.

Wesley Trent Snipes was born in Orlando, Florida, to Maryann (Long) and Wesley Rudolph Snipes. He grew up on the streets of the South Bronx in New York City, where he very early decided that the theater was to be his career. He began training in martial arts at the age of 12. He attended the High School for the Performing Arts but moved back to Florida before he could graduate. He graduated from Jones High School in Orlando. Snipes went back to New York and attend the State University of New York at Purchase.