Start a Wiki
What About Bob? 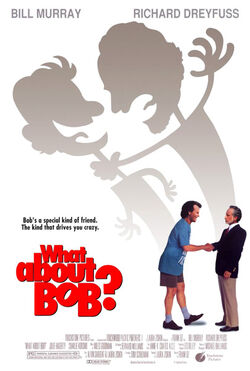 What About Bob? is a 1991 comedy film directed by Frank Oz, and starring Bill Murray and Richard Dreyfuss. Murray plays Bob Wiley, a psychiatric patient who follows his egotistical psychiatrist Dr. Leo Marvin (Dreyfuss) on vacation. When the unstable Bob befriends the other members of Marvin's family, it pushes the doctor over the edge. This film is number 43 on Bravo's "100 Funniest Movies".

Bob Wiley (Bill Murray) is a good-natured man who suffers from multiple phobias. He feels good about the results of an initial session with Dr. Leo Marvin (Richard Dreyfuss), a New York psychiatrist with a huge ego, but is immediately left on his own with a copy of Leo’s new book, Baby Steps, when the doctor goes on vacation to Lake Winnipesaukee, New Hampshire. Unable to cope, Bob follows Leo to his vacation home, where Leo is annoyed because he doesn't see patients on vacation but seeing how desperate Bob is gives him a prescription telling him to take a vacation from his problems. Bob seems to have made a breakthrough, but the next morning shows up and says that he decided to take a vacation as well and that his stay in town is facilitated by the Guttmans (Tom Aldredge and Susan Willis), a couple who hold a grudge against Leo because he purchased the home they had been saving to buy. Bob suggests that they start a friendship, although Leo thinks being friends with a patient is beneath him and attempts to avoid any further contact, but Bob gets along fine with the rest of Leo’s family and continues to socialize with them. Leo’s children Anna (Kathryn Erbe) and Sigmund (Charlie Korsmo) find that Bob relates well to their problems, in contrast with their father’s clinical approach, while Bob begins to gain an enjoyment of life from his association with them. Bob goes sailing with Anna and helps Sigmund to dive into the lake, which Leo was unable to help him with. Leo then angrily pushes Bob into the lake and Leo’s wife, Fay (Julie Hagerty), insists on inviting Bob to dinner to apologize—although Bob thinks Leo’s slights against him have been accidental. At dinner, Bob's comment on Baby Steps causes Leo to choke, and Bob saves his life by repeatedly and violently landing his full weight on the doctor's prostrated form, in a preposterous and painful variant of the Heimlich maneuver. A thunderstorm then forces Bob to spend the night. Leo wants Bob out of the house by 6:30. But, Bob is still present as Leo is interviewed on Good Morning America to publicize Baby Steps. Leo's mentioning that Bob is a patient gets him in the interview as well, and Leo manages to make a fool of himself while Bob speaks glowingly of Leo and the book and steals the limelight. Outraged, Leo throws a tantrum and then attempts to have Bob committed, but Bob is soon released after befriending the staff of the institution and demonstrating his sanity by telling psychology themed jokes. Forced to retrieve him, Leo then abandons Bob in the middle of nowhere, but Bob quickly gets a ride back to Leo’s house while a variety of mishaps delay Leo until nightfall. Leo is then surprised by the birthday party that Fay has been secretly planning for him, and he is delighted to see his beloved sister Lily (Fran Brill). But when Bob appears and puts his arm around Lily, Leo becomes completely enraged and attacks him. Bob remains oblivious to Leo’s hostility, and Fay explains that Leo has been acting unacceptably as a result of an inexplicable grudge against Bob, and she reluctantly asks him to leave; Bob sadly agrees. Meanwhile, Leo breaks into a sporting goods store, stealing a shotgun and 20 pounds of explosives. Bob becomes terrified while walking through the dark woods and is easily kidnapped at gunpoint by Leo, who straps the explosives to Bob and ties him up, calling it "death therapy." Using Leo’s "Baby Steps" approach, Bob manages to free himself; he reunites with Leo and his family out on the vacation home’s dock as the explosives destroy the house. This leaves Leo in a catatonic state. Some time later, Leo is brought to Lily and Bob’s wedding. Upon their pronouncement as husband and wife, Leo regains his senses and screams, "No!" but the sentiment is lost in the family’s excitement at his recovery. The film ends on a title card:

Bob went back to school and became a psychologist.
He then wrote a huge best seller: Death Therapy.
Leo is suing him for the rights

What About Bob? was a financial success. It grossed $63 million domestically during its original theatrical run plus an additional $29 million in video rentals and sales bringing its overall domestic gross to $92 million. Critical reaction was also favorable. Review aggregation website Rotten Tomatoes gives the film a score of 82% based on reviews from 39 critics. When the television program Siskel and Ebert reviewed the film, Roger Ebert gave the film a "thumbs up" rating praising the different performances of Bill Murray and Richard Dreyfuss onscreen together as well as most of the film's humor. He said it was Bill Murray's best movie since Ghostbusters in 1984. Gene Siskel, on the other hand, was not a fan of the film and gave it a "thumbs down." He felt Murray gave a very funny and enjoyable performance in the film, but was rather upset by the Dreyfuss character and his angry and arrogant behaviors. He felt it would have been funnier if Dreyfuss had not given such an angry performance in the film and said that Dreyfuss ultimately ruined the film for him. Leonard Maltin also gave the film a favorable review: in Leonard Maltin's Movie and Video Guide he gives the film three stars out of a possible four, saying it's "a very funny outing with Murray and Dreyfuss approaching the relationship of the road runner and the coyote." Maltin faulted the film only for its ending, which he found very abrupt and silly.

The movie was filmed in and around the town of Moneta, Virginia, located on Smith Mountain Lake. Production had to move south because at the real Lake Winnipesaukee in New Hampshire, the leaves were already turning for the fall season. While there is a lake in New Hampshire named Winnipesaukee, there is no town by that name (as the film implies). Filming lasted from August 27–November 21, 1990. The scenes of Bob arriving in town on the bus with his goldfish were filmed in downtown Moneta, which was spruced-up and repainted for the movie. The local institute which Leo tries to commit Bob in is actually the local Elks National Home for retirees in the nearby town of Bedford, Virginia. Originally director Frank Oz had Woody Allen in mind for the role of Dr. Leo Marvin, given Allen's reputation for quirkiness in his films. Allen declined the role, and Richard Dreyfuss ultimately was cast. Patrick Stewart was also considered for the role. Early in development Robin Williams had been attached to the project. Murray and Dreyfuss intentionally did not get along during filming. Dreyfuss encouraged Murray to annoy him on purpose.

Retrieved from "https://movies.fandom.com/wiki/What_About_Bob%3F?oldid=75165"
Community content is available under CC-BY-SA unless otherwise noted.