watch 01:56
The Loop (Movies)
Do you like this video?
Play Sound
What Ever Happened to Baby Jane? 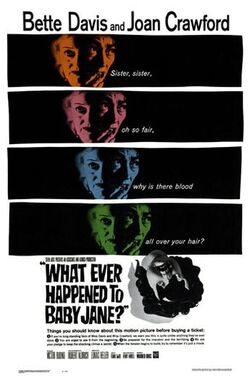 What Ever Happened to Baby Jane? is a 1962 American psychological thriller film produced and directed by Robert Aldrich. It stars Bette Davis, Joan Crawford, Victor Buono and Maidie Norman. The film is based on the 1960 novel of the same name by Henry Farrell. It was nominated for five Academy Awards, winning one for Best Costume Design, Black and White.

Jane Hudson (Bette Davis) is an aging child star left to care for her wheelchair-bound sister Blanche (Joan Crawford), also a former child actress. Stuck living together in a mansion in old Hollywood, Blanche plots to get even with Jane for the car crash that left her crippled years earlier. But Jane is desperate to keep Blanche imprisoned as she plans a new rise to fame, and tries to hide Blanche's existence from doctors, visitors and neighbors while she devises a way to get rid of her sister.

The film received positive reviews and elicited mixed responses over the Davis/Crawford combination. In his review in The New York Times, Bosley Crowther observed, "[Davis and Crawford] do get off some amusing and eventually blood-chilling displays of screaming sororal hatred and general monstrousness ... The feeble attempts that Mr. Aldrich has made to suggest the irony of two once idolized and wealthy females living in such depravity, and the pathos of their deep-seated envy having brought them to this, wash out very quickly under the flood of sheer grotesquerie."

Retrieved from "https://movies.fandom.com/wiki/What_Ever_Happened_to_Baby_Jane%3F?oldid=104578"
Community content is available under CC-BY-SA unless otherwise noted.