View src
watch 01:33
House of the Dragon Trailer - The Loop
Do you like this video?
Play Sound
Whiplash 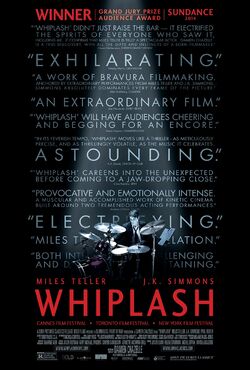 Whiplash is a 2014 American drama film written and directed by Damien Chazelle based on his experiences in the Princeton High School Studio Band. The film stars Miles Teller as a student jazz drummer who seeks the respect of an abusive teacher played by J. K. Simmons. It also stars Paul Reiser and Melissa Benoist.

Whiplash premiered in-competition in the US Dramatic Category at the 2014 Sundance Film Festival on January 16, 2014, as the festival's opening film. Sony Pictures Worldwide acquired the international distribution rights. The film was nominated for five awards at the 87th Academy Awards, and won three for Best Supporting Actor (for Simmons), Best Film Editing and Best Sound Mixing. Whiplash has received critical acclaim, with critics particulary praising the performances of Simmons and Teller and the film itself has gained a reputation as one of the best movies of 2014.

Andrew Neiman (Miles Teller) is a first-year jazz student at the prestigious Shaffer Conservatory in New York. He has been playing drums from a young age and aspires to become one of the greats like Buddy Rich. Conductor Terence Fletcher (J.K. Simmons) accepts Andrew into his studio band as the alternate for Carl (Nate Lang), the core drummer. Fletcher is abusive toward his students, mocking and insulting them; when the band rehearses the Hank Levy piece "Whiplash", Fletcher hurls a chair at Andrew for not keeping his tempo, and humiliates him in front of the class.

Determined to impress Fletcher, Andrew practices until his hands bleed and breaks up with his girlfriend Nicole (Melissa Benoist), believing she will distract him. At a local jazz competition, Andrew misplaces Carl's sheet music; as Andrew can perform "Whiplash" from memory, Fletcher promotes him to core drummer. However, Fletcher replaces him with Ryan (Austin Stowell), the core drummer from Andrew's former class.

The next day, Fletcher tearfully reveals in class that a talented former student of his, Sean Casey, has died in a car accident. The band rehearses "Caravan", but Ryan struggles with the tempo; Fletcher auditions Andrew, Ryan and Carl for hours while the class waits outside despite all three struggling to keep tempo and finally gives the core position to Andrew.

On the way to a jazz competition, Andrew's bus breaks down. Determined to make the performance, he rents a car, but arrives late for rehearsal without his drumsticks. He drives back to the car rental office and retrieves the drumsticks, but as he speeds back, his car is hit by a truck. He crawls from the wreckage and arrives on stage badly injured. When Andrew is unable to play, Fletcher tells him he is "done." Andrew attacks Fletcher in front of the audience before being dragged away.

A few days later, Andrew is expelled from Shaffer and meets with a lawyer representing the parents of Sean Casey. The lawyer explains that Sean actually hanged himself, having suffered anxiety and depression after joining Fletcher's class. Sean's parents want to prevent Fletcher from teaching. Andrew agrees to testify and Fletcher is fired.

Months later, Andrew sees Fletcher performing at a club. They drink together and Fletcher explains that he pushes his students beyond the expected so they might achieve greatness. He invites Andrew to perform at a festival concert with his band. Andrew agrees and invites Nicole, but she is in a new relationship and declines.

Fletcher leads the band in a new piece Andrew was not given sheet music for. Fletcher reveals to Andrew that he knew all along he was responsible for getting him fired, and keeping the new piece a secret is his revenge. Andrew leaves the stage humiliated, but returns and begins playing "Caravan", interrupting Fletcher as he addresses the audience. The rest of the band joins him, and, though surprised, Fletcher follows suit. Andrew ends the performance with an extravagant drum solo; Fletcher gives a nod of approval to Andrew as he finishes.

While attending Princeton High School, writer director Damien Chazelle was in a "very competitive" jazz band and drew on the experience of "just dread" that he felt in those years. He based the conductor, Terence Fletcher, on his former band instructor but "pushed it further" adding in bits of Buddy Rich as well as other notorious band leaders.

Originally conceived in the form of an 85-page screenplay, Whiplash came to prominence after being featured in the 2012 Black List that includes the top motion picture screenplays not yet produced. Right of Way Films and Blumhouse Productions produced, and in order to secure financing for the feature, helped Chazelle turn 15 pages of his original screenplay into a short film starring Johnny Simmons in the role of the drummer and J. K. Simmons in the role of the teacher. The 18-minute short film went on to receive much acclaim after screening at the 2013 Sundance Film Festival, which ultimately attracted investors to sign on and produce the complete version of the script. The feature-length film was financed for $3.3 million by Bold Films.

In August 2013, Miles Teller signed on to star in the role originated by Johnny Simmons; J. K. Simmons remained attached to his original role. Principal photography began the following month with filming taking place throughout Los Angeles, including the Hotel Barclay, Palace Theater, and the Orpheum Theatre.

Early on Chazelle gave Simmons direction that "I want you to take it past what you think the normal limit would be" telling him "I don’t want to see a human being on-screen anymore. I want to see a monster, a gargoyle, an animal." Many of the band members in the movies were real musicians or music students and Chazelle tried to capture the real moments of terror from them. However, Chazelle noted that in between takes Simmons was "as sweet as can be" which Chazelle credits for keeping "the shoot from being nightmarish."

Whiplash received universal acclaim upon it's release, with Simmons' performance receiving universal praise. The film has a "Certified Fresh" score of 94% on Rotten Tomatoes, based on 237 reviews, with an average rating of 8.6 out of 10. The site's consensus states, "Intense, inspiring, and well-acted, Whiplash is a brilliant sophomore effort from director Damien Chazelle and a riveting vehicle for stars Miles Teller and J. K. Simmons." On Metacritic the film has a score of 88 out of 100, based on 49 critics, indicating "universal acclaim."