Start a Wiki
watch 01:48
The Loop (Movies)
Do you like this video?
White Heat 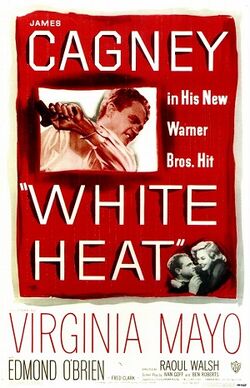 White Heat is a 1949 film noir based on a story by Virgina Kellogg. Directed by Raoul Walsh and screenplay by Ivan Goff and Ben Roberts, it is starring James Cagney, Virginia Mayo, Edmond O'Brien, Margaret Wycherly and Steve Cochran. The film was released on September 2, 1949.

Gang leader Cody Jarrett (James Cagney) lives for his mother, planning heists between horrible headaches. During a train robbery that goes wrong, Cody shoots an investigator. Realizing Cody will never be stopped if he knows he's being pursued, authorities plant undercover agent Hank (Edmond O'Brien) in Cody's cell. When his mother dies, a distraught Cody breaks out of jail, bringing Hank along to join his gang. With Hank in communication with the police, Cody plans a payroll heist.

Critical reaction to the film was positive, and today it is considered a classic. Bosley Crowther of The New York Times called it "the acme of the gangster-prison film" and praised its "thermal intensity".

White Heat was listed in Time magazine's top 100 films of all time. Based upon both contemporary and more recent film reviews, the film has a 100% "fresh" rating on film review aggregate website Rotten Tomatoes.

Scenes with Cagney were used in the comedy film Dead Men Don't Wear Plaid putting Steve Martin to act with Cagney in scenes, as well as in the 1992 crime-drama film Juice. The "Made it ma, top of the world" scene also appears in the 1991 Ricochet starring Denzel Washington. Denzel recites the quote in the final scene atop a tower. A short clip was also played in a scene from Hart to Hart, Season 3, Episode 21, titled "Hart and Sole", airing 6 April 1982. Quotes from the film were also used in the album track "White Heat" by Madonna, on her third album True Blue; the song was also dedicated to Cagney. Several quotes from the film were used in the hip-hop single "Back In Business" by E-40 and produced by his son Droop-E, on this 2010 album Revenue Retrievin': Day Shift. In 2013, Americana music artist Sam Baker included the song "White Heat" on his 2013 CD, "Say Grace;" the song's lyrics include many references to action in the Cagney film. It is mentioned in season 2 episode 12 of Breaking Bad.

Retrieved from "https://movies.fandom.com/wiki/White_Heat?oldid=97721"
Community content is available under CC-BY-SA unless otherwise noted.