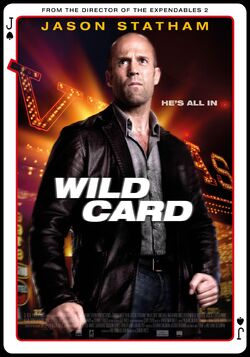 Wild Card is a 2015 American crime thriller film directed by Simon West, and starring Jason Statham, Michael Angarano, Dominik Garcia-Lorido, Milo Ventimiglia, Hope Davis, and Stanley Tucci. It is based on the 1985 novel Heat by William Goldman and the remake of the 1986 film adaption. It was released on January 30, 2015 in the United States.

Nick Wild is a Las Vegas bodyguard with lethal professional skills and a personal gambling problem. When a friend is beaten by a sadistic thug, Nick strikes back, only to find out the thug is the son of a powerful mob boss. Suddenly Nick is plunged into the criminal underworld, chased by enforcers and wanted by the mob. Having raised the stakes, Nick has one last play to change his fortunes and this time, it's all or nothing.

Lionsgate released the film in a limited release and through on demand on January 30, 2015.

Wild Card was a not a box office success, making only $3.4 million against a $30 million budget.

Wild Card has generally received negative reviews from film critics. The film currently has a rating of 28% on Rotten Tomatoes. Based on 36 reviews, the film scored an average rating of 4.8 out of 10. The site's consensus states: "Hardcore Jason Statham fans may enjoy parts of Wild Card, but all other action aficionados need not apply."

Betsy Sharkey of the Los Angeles Times gave the film a negative review, calling Wild Card "predictable". She summed up her review by saying that Wild Card "is no royal flush, no full house, no three of a kind. A bust is I think the term I'm searching for"

Retrieved from "https://movies.fandom.com/wiki/Wild_Card?oldid=101141"
Community content is available under CC-BY-SA unless otherwise noted.