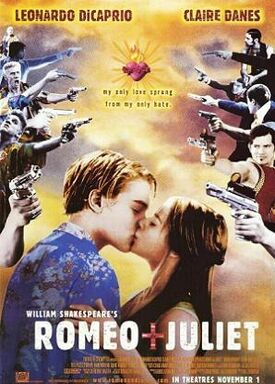 The film is a modernization of Shakespeare's play, designed to appeal to a younger modern audience. The warring families (the Montagues and the Capulets) are represented as warring business empires and swords are replaced by guns. Despite the adaptation, the film retains Shakespeare's original dialogue, albeit edited down for modern cinema audiences.

The plot has some changes from the original script:

Much of the film's story takes place in the fictional Los Angeles area[citation needed] town or suburb called "Verona Beach", which is based on the real life Venice Beach[citation needed] (a play on the fact that both are cities in Italy). As with the play, a brief part of the film takes place in a location known as Mantua, which is depicted as a desert-like hinterland. Verona Beach is the center of a corporate war between two leaders of industry, "Montague" and "Capulet", rather than just a mere family feud. Prince Escalus is renamed "Captain Prince", and instead of being Prince of Verona, he is the Chief of the Verona Beach Police Department. His relationship to Paris (called "Dave Paris" in the movie) is removed from the film. Romeo and Juliet's parents are given names here too, the names in this case being Ted and Caroline Montague and Fulgencio and Gloria Capulet. Dave Paris is stated as being the Governor's son rather than a nobleman, and throughout the film he speaks in a conceited and pompous manner around Juliet and her father. He only wants to marry her for wealth and ego rather than real love.

In addition to the characters being updated, many of the props were replaced with analogous contemporary props. In place of swords, the characters wield guns with fictional brand names like "Sword 9mm" (which was used in the beginning gas station shootout, "Dagger" (which Mercutio throws to the ground before using his fists, or "Rapier" (Which belonged to Tybalt, and Romeo uses it to shoot Tybalt); Lord Montague's "Longsword" is a South African MAG-7 shotgun. Instead of chasing Tybalt on foot, Romeo and Tybalt engage in a car chase. Romeo crashes out Tybalt's car by the central fountain of the city, during which Romeo presses the barrel of Tybalt's pistol to his head and asks him to end his life. Tybalt refuses and in a resurgence of anger Romeo kills Tybalt with his own custom handgun. Although most of the fights are done with guns (and fists) instead of swords, Mercutio's death comes at the hands of Tybalt wielding a large shard of glass found on the beach. Mercutio's "Queen Mab" is an ecstasy-like drug in the form of a pill that Romeo takes before attending the Capulet party. Friar Lawrence gives the letter for Romeo in Mantua to a postal service called "Post Haste".

Template:Expand-section Most of the film was shot in Mexico City, Mexico, but other parts were shot in parts of Miami. A section of the film was filmed during a real hurricane, causing the stage producers to rebuild the set. When filming the gas station scene at the start of the movie the actor Dash Mihok who played Benvolio accidentally ran out into the real traffic.

Leonardo DiCaprio was Luhrmann's first choice to play Romeo, while the casting of Juliet was a lengthy process. Natalie Portman was the original actress to play Juliet, and she traveled to Sydney for rehearsals. After rehearsing a few scenes, the producers began to feel that she was too young for the role; according to Portman, they felt that the footage looked like DiCaprio was "molesting" her.

Retrieved from "https://movies.fandom.com/wiki/William_Shakspeare%27s_Romeo_%2B_Juliet_(1996)?oldid=134809"
Community content is available under CC-BY-SA unless otherwise noted.