Start a Wiki
watch 01:27
The Loop (Movies)
Do you like this video?
Winston Duke 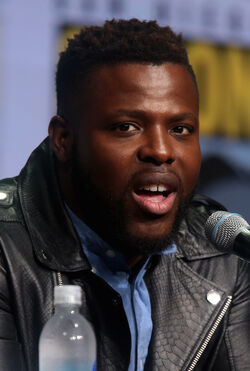 Duke was born in Tobago, Trinidad & Tobago and moved to the U.S. with his mother, Cora Pantin, and sister when he was nine years old. He graduated from Brighton High School in Rochester, New York in 2004.

He started acting in theater productions for Portland Stage Company and Yale Repertory Theatre before being cast in Person of Interest. At Yale, he befriended fellow actor Lupita Nyong'o, with whom he would later star in Black Panther. Winston returned to his native Trinidad & Tobago in 2012 for the theatre production of An Echo in the Bone starring alongside actress Taromi Lourdes Joseph and directed by fellow Yale alumna Timmia Hearn Feldman.

Duke stars in Marvel Cinematic Universe's Black Panther and Avengers: Infinity War as M'Baku. In 2018, Duke was cast in the horror film Us directed by Jordan Peele.

Retrieved from "https://movies.fandom.com/wiki/Winston_Duke?oldid=155269"
Community content is available under CC-BY-SA unless otherwise noted.