Edit
watch 01:23
Wiki Targeted (Entertainment)
Do you like this video?
Play Sound
Won't Back Down 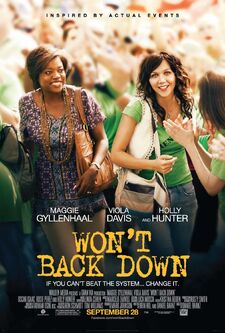 Won't Back Down (previously titled Still I Rise, Learning To Fly and Steel Town) is a drama film directed by Daniel Barnz starring Maggie Gyllenhaal, Viola Davis, and Holly Hunter. It was released on September 28, 2012.

Two determined mothers, a bartender (Gyllenhaal) and a teacher (Davis), look to transform their children's failing inner city school. Facing a powerful and entrenched bureaucracy and corruption from the teacher's union president (Hunter) and the school's principal (Nunn), they risk everything to make a difference in the education and future of their children.

The film is loosely based on the events surrounding the use of the parent trigger law in Sunland-Tujunga, Los Angeles, California in 2010, where several groups of parents attempted to take over several failing public schools. The Parent Trigger law, which was passed in California and other states in 2010, allowed parents to enforce administrative overhaul and overrule administrators in under-performing public schools if petitioned. If successful, petitions allow parents to direct changes such as dismissal of staff and potential conversion of a school to a charter school.

Walden Media, a film studio which released a 2010 documentary film Waiting for "Superman" with Paramount Pictures and Participant Media about the American educational system, produced the film, with 20th Century Fox releasing it on September 28, 2012. American actresses Maggie Gyllenhaal and Viola Davis were among the first to be cast, with Academy award-winning actress Holly Hunter being cast later on. The film marked Hunter's first film appearance in 7 years since The Incredibles and The Big White'. The film's trailer was released on May 17, 2012. The film's entire budget was 25 million dollars, not counting the undisclosed amount for marketing the film.

Private foundations and the U.S. Chamber of Commerce have contributed more than $2 million for a publicity campaign for the film. Television ads, bookmarks, websites and private screenings a six-month cross-country tour will promote the film. Promoters have scheduled private screenings in states from New York to Georgia and Utah, to promote the movie and its parent trigger message.

The film has received mixed to negative reviews from critics, as Won't Back Down currently holds a 33% rating on Rotten Tomatoes based on 66 reviews. Variety called the film a "heavy-handed inspirational drama" that "grossly oversimplif[ies] the issue at hand." The site continued, "Barnz's disingenuous pot-stirrer plays to audiences' emotions rather than their intelligence, offering meaty roles for Maggie Gyllenhaal as a determined single mom, and Viola Davis as the good egg among a rotten batch of teachers, while reducing everyone else to cardboard characterizations. Absent high-profile champions, femme-centric pic could suffer from low attendance."

Michelle Rhee presented the film at separate events near both the Republican and Democratic 2012 national conventions several weeks before its theatrical release.

Michelle Rhee, former Chancellor of the Washington, DC school system said of the movie, "They had done a remarkable job capturing some of the difficult tensions within the reform movement." Critics have contended that the film is an ideological vehicle of conservative activist Philip Anschutz and that the film is slanted to promote the parent trigger movement. Alexander Zaitchik, writing for Salon.com, described the movie as a "propaganda flick" which attacks teachers' unions. He argues that Walden Media are "linked at the highest levels to the real-world adult alliance of corporate and far-right ideological interest groups that constitutes the so-called education reform movement, more accurately described as the education privatization movement."