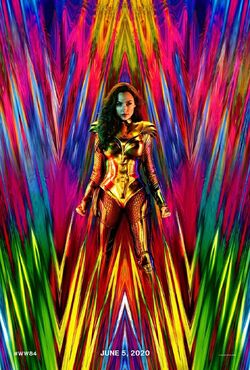 Wonder Woman 1984 is an American superhero film directed by Patty Jenkins. The film is a sequel to the 2017 film Wonder Woman, with Gal Gadot set to reprise her role as Diana Prince / Wonder Woman. Alongside her, Chris Pine, Kristen Wiig, Pedro Pascal, Connie Nielsen, and Robin Wright.

The film was released in the United States on December 25, 2020 exclusively on HBO Max, by Warner Bros. Pictures.

Diana Prince comes into conflict with the Soviet Union during the Cold War in the 1980s, and finds a formidable foe in the form of the Cheetah.

Wonder Woman 1984 recieved average reviews from critics. On Rotten Tomatoes, The film has a score of 63% based on 325 reviews with an average score of 6.2/10.

Retrieved from "https://movies.fandom.com/wiki/Wonder_Woman_1984?oldid=296926"
Community content is available under CC-BY-SA unless otherwise noted.