Start a Wiki
watch 01:27
The Loop (Movies)
Do you like this video?
X-Men: Days of Future Past 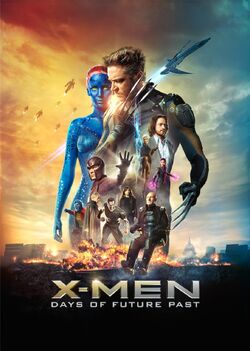 X-Men: Days of Future Past is a 2014 superhero sci-fi adventure action film based on the fictional X-Men characters that appear in Marvel Comics. Directed by Bryan Singer, it is the seventh installment of the X-Men film series and acts as a sequel to both 2006's X-Men: The Last Stand and 2011's X-Men: First Class. The story, inspired by the 1981 Uncanny X-Men storyline "Days of Future Past" produced by Chris Claremont and John Byrne, focuses on two time periods and Wolverine going to 1973 to save the future of mankind. The film stars an ensemble cast, including Hugh Jackman, James McAvoy, Michael Fassbender, Jennifer Lawrence, Halle Berry, Anna Paquin, Ellen Page, Peter Dinklage, Sir Ian McKellen, and Patrick Stewart. Simon Kinberg wrote the screenplay from a story conceived by him, Matthew Vaughn, and Jane Goldman.

The film is a British-American co-production with a budget of US$200 million. Principal photography began in Montreal, Quebec in April 2013 and concluded in August the same year, with additional filming and pick-ups taking place in November 2013 and February 2014. The film premiered in New York City on May 10, 2014, and was theatrically released on May 23.

X-Men: Days of Future Past has received critical acclaim and is the 2nd best-reviewed film in the X-Men film series (Behind Logan). Reviewers commended its fresh visual style, story, pacing, acting and depth. It is also the highest-grossing film in the series, having earned over $748 million worldwide. It also received an Academy Award nomination for Best Visual Effects, making it the first X-Men film to be nominated for an Academy Award.

A sequel, X-Men: Apocalypse, is scheduled for release on May 27, 2016, with Bryan Singer returning to direct.

In a dystopian 2023, where the world has been ravaged by constant war, we find Central Park turned into a prison camp with mutants under Sentinel guard. Mutants are being hunted to extinction by the Sentinels or experimented on to exploit their abilities by the remaining humans. In Moscow, Warpath, Blink, Bishop, Colossus and Sunspot, are preparing to fight dispatched Sentinels that continue to hunt the X-Men. As the Sentinels enter in the underground hideout, the Sentinels attack them. Sunspot fires at a Sentinel which holds it back. As the rest of the X-Men fight the other two Sentinels we see how they share Raven's ability to mimic, the Sentinels quickly adapt to the mutants' abilities. Blink finds Iceman and makes a portal for him to enter to defend Shadowcat and Bishop who run to change the past, and save the group. A Sentinel snaps Sunspot's neck, Colossus's head got smashed, Iceman has his head broken off and crushed. Buying time for Bishop in the past...Blink gets skewered right in the navel and Warpath (while making a last stand in front of the vault door) gets vaporized. The Sentinel melts through the vault door and shoots an energy beam towards Bishop and Kitty, she looks up stating "too late, assholes" and everything slows in time and begins to fade away as it has never happened, revealing that they did indeed change the past; having never been in Moscow to begin with. The scenes then fades to Xavier's Cerebro red Mutant view where countless mutants are being killed by Sentinels or tortured by humans and screams and cries are heard. Mutants are on the brink of extinction.

We now cut to a new and highly advanced version of the X-Jet capable of supersonic flight (beyond the speed a sentinel can catch them) where we hear Charles say "I've found them..." And they head full speed towards a mountain range in China.

Charles Xavier, Magneto, Wolverine, and Storm arrive to find mutants hiding in China, where they plan to send Professor X back to 1973 to stop Mystique from killing Bolivar Trask, which triggered the Sentinel Program. However, Wolverine volunteers to go back due to his regenerative powers, and because Professor X couldn't physically handle going back decades. As the X-Men hide themselves in a monastery, Wolverine is sent back to the past by Shadowcat before asked by Professor X and Magneto to unite them together to change the future, saying that this is their final chance to change the past, or it will worsen.

Wolverine wakes up in 1973 where is seen in a bed filled with water with a woman's arm around him. Three men then walk in and begin to fire at him but are killed with Wolverine's bone claws. Wolverine then arrives at the disused mansion, where he makes an encounter with Hank McCoy who ends up transforming into his Beast-like form. As Wolverine is thrown around the house, Professor X comes down where Wolverine then asks his help, who disagrees, saying that he remembered him from eleven years back. As Hank explains why the Professor is walking, Professor X takes one more dose of the drug which makes him walk again. He then comes down and agrees to help but only for Mystique and not for the future. They then plan to break Erik out of prison for killing President John F. Kennedy. Wolverine mentions that he knows a man who can run really fast as the three then head to Peter Maximoff's house and asks him to help. Meanwhile, Trask asks for funding for his Sentinel program but is denied. In Saigon, Mystique disguises herself as a colonel and then fights off the military where she rescues Havok, Ink, Toad and other mutant soldiers to be sent to Trask Industries.

At the Pentagon, Charles, Wolverine, Quicksilver and Hank sneak into the facility and free Erik. Quicksilver disguises himself as someone to bring him food but brings a note with it. Quicksilver then breaks the glass and then frees Magneto. While in the elevator, the two share a moment where Quicksilver says that his mother knew a man who could control metal like him referencing that Erik was Quicksilver's dad. Onboard a plane, Charles and Erik argue over how they each abandoned each other and their kind, resulting in their deaths. Meanwhile, Mystique impersonates a general at a meeting in Paris where she plans to kill Trask, but is unsuccessful as she gets tasered in the belly button by William Stryker. Wolverine, Charles, Erik and Hank arrive, where Erik plans to kill Mystique to prevent the program. She is shot in the leg while in the air after escaping through the window. Erik chases after her and pulls the bullet out of her leg and plans to drive it through her deep umbilicus, but Beast attacks Erik while Mystique escapes. Meanwhile, Wolverine sees Stryker and has traumatic flashbacks. In 2023, Wolverine starts violently shaking and stabs Shadowcat in the navel. Back in 1973, he briefly does not know why he’s there and who young Charles is.

President Richard Nixon eventually agrees to Trask’s program and arranges an unveiling in Washington D.C. Magneto breaks into Trask’s Industries and steals the design plans of the Sentinels and implants metal on the Sentinels on a train to D.C. Back at the mansion, Charles eventually refuses to take a serum after Wolverine convinces him, which allows him to walk again but lose his powers, and uses Cerebro to find Mystique. As Wolverine explains what he has done for mutants and for him, he tells him to read his mind where he sees his traumatic experiences and then later telepathically talks to the older Professor X where he is asked to hope again.

As Wolverine, Professor X and Hank go to the unveiling of the Sentinels to find Mystique, the Sentinels begin attacking the public, where Nixon and Trask are taken to a safe room, followed by Mystique in disguise. Magneto lifts an entire stadium and transports it to surround the White House and puts all but one Sentinel on lookout, and makes it to go after Wolverine and Beast. Wolverine attacks it but Magneto stabs him with reinforcement steel then drowns him in a nearby river. At the same time in 2023, Storm, Bishop, Colossus, Warpath, Sunspot, Iceman and Blink are killed protecting the monastery. When Trask discovers Mystique is in the safe room, Magneto pulls the safe room out of the White House. Beast injects himself with the serum to turn back into his human form so that the Sentinel will not attack him. Mystique slightly grazes Magneto with a plastic gun before being convinced by Professor X via telepathic powers to not kill Trask. Back in 2023, the Sentinels are close to firing upon the X-Men but everyone disappears. As a mutant was seen to save the President, the Sentinel program is decommissioned and Trask is charged with trying to sell American military secrets to other countries.

Logan wakes up back in the school and sees that Ororo, Kitty, Peter, Bobby, Hank, Rogue, Jean Grey and Cyclops all have survived. Logan finds Charles, who lets him know that they have a lot of catching up to do. Back in 1973, Mystique, impersonating Stryker, recovers the drowning Wolverine from the water.

In a post credits scene people are seen bowing and chanting to En Sabah Nur as the Four Horsemen watch from afar.

X-Men: Days of Future Past received critical acclaim from critics with a rating of 90% on Rotten Tomatoes based on 321 reviews with an average score of 7.53/10.

Retrieved from "https://movies.fandom.com/wiki/X-Men:_Days_of_Future_Past?oldid=217372"
Community content is available under CC-BY-SA unless otherwise noted.