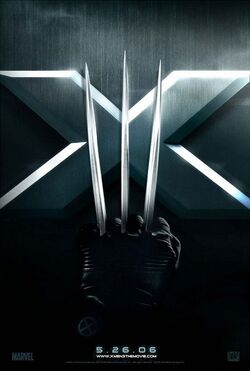 X-Men: The Last Stand is the third film of the series. Bryan Singer wanted to shoot the third film back-to-back with a fourth. On July 16, 2004, he left to direct Superman Returns, having only completed a third of a treatment focusing on Phoenix, and introducing Emma Frost, a role intended for Sigourney Weaver and Gambit intended for Keanu Reeves. In addition, Singer also wanted to showcase more characterizations of Rogue, Iceman, and Pyro. Simon Kinberg and Zak Penn were hired the following month, and a studio executive read Joss Whedon's Astonishing X-Men story "Gifted", featuring a mutant cure, suggested it be the primary story. Matthew Vaughn came on board as director in February 2005, but left due to the rushed production schedule. Brett Ratner took over in June, and filming began on August 2, 2005.

The discovery of a cure for mutations leads to a turning point for Mutants (Hugh Jackman, Halle Berry, Famke Janssen, Anna Paquin, Rebecca Romijn, Kelsey Grammer). They may now choose to give up their powers and become fully human or retain their uniqueness and remain isolated. War looms between the followers of Charles Xavier (Patrick Stewart), who preaches tolerance, and those of Magneto (Ian McKellen), who advocates survival of the fittest.

Retrieved from "https://movies.fandom.com/wiki/X-Men:_The_Last_Stand?oldid=130286"
Community content is available under CC-BY-SA unless otherwise noted.