Start a Wiki
watch 01:48
The Loop (Movies)
Do you like this video?
Yogi Bear 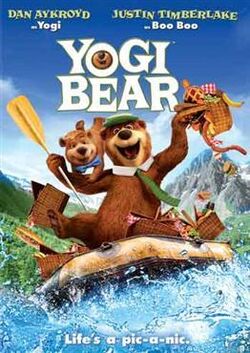 Yogi and Boo Boo are two brown bears who have a penchant for stealing picnic baskets from visitors to Jellystone Park, while park rangers Smith and Jones try to prevent them from doing so. Meanwhile, Rachel, a nature documentary maker, arrives at the park to make a film about Yogi as a rare example of a talking bear. To this end she fits Boo Boo with a bow tie containing a miniature camera, so she can get footage of Yogi in his natural habitat.

Meanwhile, Mayor R. Brown realizes that Franklin City is facing bankruptcy due to profligate spending on his part. To solve it and fund his election campaign to be the next governor, the mayor decides to select Jellystone as a logging site, and Jellystone is prepared to be shut down.

To save the park from being shut down, Ranger Smith holds a Centennial festival where he hopes to make a profit selling Season Passes. To sabotage the effort, Mayor Brown plays on Ranger Jones' desire to be head ranger and promises him the position if the funds are not raised. Yogi had promised Smith to stay out of sight during the festival, but Jones convinces him to go ahead with the helping plan. Yogi tries to please the crowd with a waterskiing performance which goes awry when he inadvertently sets his cape on fire. In the ensuing chaos, the fireworks Smith set up are knocked over and ignited prematurely, launching them into the assembled audience who flee in a panic. After Jellystone is shut down, Ranger Smith is forced to stay in Evergreen Park, a small urban enclave choked with litter and pollution, but not after he tells Yogi that Yogi is not as smart as he thinks he is. Now seeing that their home is in danger of being destroyed, Yogi and Boo Boo travel to Evergreen Park, where Smith places the clues that Mayor Brown had given him, that Brown and his chief of staff, are planning to cut down Jellystone and its trees, to make money. They come back to Jellystone, and along with Rachel plan to stop the sale of the park. They learn that Boo Boo's pet frog-mouthed turtle is a rare and endangered species, which means that the Park cannot be destroyed with the frog-mouthed turtle there. Ranger Jones also teams up with them, after reforming when he learns Mayor Brown's plans for Jellystone. Mayor Brown captures the frog-mouthed turtle with help from his guards and tells his Chief of Staff to take it away, knowing that if it is no longer in the Park there is nothing to stop him cutting down the trees. He confesses his plan to shut down the park to Yogi and the others.

However, after Mayor Brown begins his press conference, Rachel realises that the camera in Boo Boo's bow tie has been filming the whole time and has captured the Mayor's confession. The turtle escapes from Brown's Chief of Staff by using his frog-like tongue to pull itself through the car window and out into the park. With Yogi and Boo-Boo distracting the security guards, Ranger Smith connects Boo Boo's camera to the jumbotron and Brown's confession is played to the assembled members of the press, and Brown and his guards are arrested by police officers. Brown's chief of staff attempts to run off, but Rachel pins him to the ground using what she learned from her time living with snow leopards. Smith resumes his post as head ranger, and he and Rachel admit their romantic feelings about each other. Jones works on the park's entrance booth, handing out leaflets about the rare frog-mouthed turtle to the vastly increased number of visitors, while Yogi and Boo Boo are stealing picnic baskets once again with Ranger Smith and Rachel in pursuit.

On October 2, 2008, it was confirmed that a live-action/CGI Yogi Bear movie was in the works.[7][8] Ash Brannon was originally scheduled to direct the film but was replaced by Eric Brevig (Journey to the Center of the Earth 3-D) when it was decided that the film would be produced as a 3-D project. Filming took place in the Lake Whakamaru Reserve, Waikato, New Zealand, as it was winter in the northern hemisphere and to wait for summer would put the production end time to be 6 months longer than if in southern hemisphere.

Like many Hanna-Barbera characters, in the original cartoon, Yogi's personality and mannerisms were based on a popular celebrity of the time. Art Carney's Ed Norton character on The Honeymooners was said to be Yogi's inspiration;[9][10] his voice mannerisms broadly mimic Carney as Norton.[11] Norton, in turn, received influence from Borscht Belt and comedians of vaudeville.[10] Dan Aykroyd, the voice actor of Yogi Bear, stated that he is trying to evoke the influences that shaped the original Yogi Bear's voice. Aykroyd said, "It's about hitting certain notes, going back to those old Lower East Side rhythms, the Catskills, Jersey, Upstate New York. It's the Yiddish language, essentially, being spoken in English. It's the 'setup, delivery, punch' that sitcoms live on today. That's where the origin of American humor is."[10] Aykroyd has stated that he grew up watching Yogi Bear on the long, cold, dark afternoons in his native Ottawa: "As a kid growing up in Ottawa, Canada, where the sky turns dark in the winter at about 3:30, Yogi Bear was my fire, my hearth, when I would come home. I would immediately turn on the TV while I thawed out."[12]

Justin Timberlake came in with a prepared Boo-Boo voice; when he was learning to sing when he was younger, he imitated various cartoon characters. Eric Brevig said that he intended to make a film that did not want parents who remembered watching Yogi Bear cartoons to feel marginalized and displaced by the contemporary rendition of Yogi Bear.[10]

The film's first trailer was released online on July 28, 2010. It was also attached with Cats & Dogs: The Revenge of Kitty Galore and Alpha and Omega.[13] A second trailer premiered with Legend of the Guardians: The Owls of Ga'Hoole, and a third trailer premiered with Megamind, Tangled, and Harry Potter and the Deathly Hallows – Part 1. It features a Todd Collins song called "Walk, Walk, Walk." One of the trailers was also attached with UK showings of Tron: Legacy.

Rhythm and Hues provided CGI character animation for Yogi Bear, Boo-Boo Bear and the Turtle in the film. The company had previously worked with Hanna-Barbera on past theatrical productions: The Flintstones (1994), its prequel Viva Rock Vegas (2000), Scooby-Doo (2002), and its sequel Monsters Unleashed (2004).

Yogi Bear received negative reviews from film critics. Based on 101 reviews collected by Rotten Tomatoes, the film received a 13% "Rotten" approval rating for critics, with an average score of 3.6/10. The site's consensus stated "Yogi Bear's 3D effects and all-star voice cast are cold comfort for its aggressively mediocre screenplay."[14] The compiled score on Metacritic is 35%. One of few positive reviews came from film critics at Spill.com, who appreciated the film staying true to its original source material, and not trying to "hip it up", comparing the 2007 film Alvin and the Chipmunks. The critics also praised Dan Aykroyd and Justin Timberlake's performances, along the 3D effects. Common Sense Media gave the film one star, saying "Dumber-than-average family comedy won't even impress kids." IGN gave the film two stars, and summed up their review by saying "Of course, Yogi Bear is meant as a kids movie. And one supposes that it works on that level (the little ones at the press screening I attended seemed mildly amused). But we learned long ago that kids movies can operate on more than one level, and that's not something that director Eric Brevig (Journey to the Center of the Earth 3-D) or his screenwriters are interested in. The result is a movie that's dumber than the average bear. Though at least it has a pee joke in it."

Yogi Bear debuted at the American and Canadian box office at #2 behind Tron: Legacy, with an under-performing $16,411,322;[15] compared to Tron Legacy's $44,026,211. The opening weekend was lower than Warner Bros. expected, but executives believed that the film would hold well throughout the holiday season.[16] The film earned $28 million in its first seven days, becoming Warner Bros.' top-grossing start for a family film for that year. In its second weekend, the film fell 53% to $7.8 million, falling to fifth place.

This number was a much harder fall than what Warner Bros. was hoping for, but it blamed the drop on Christmas Eve landing on a Friday plus the big snowstorm in the eastern United States during that period. On Monday, that blame seemed justified, as the film jumped up 11% from Sunday to $3.6 million, which was altogether a 33% jump from its previous Monday. In its third weekend, the film jumped up 66% to $13 million and ranking fourth. The next weekend, it dropped 46% and ranked eighth with $6.8 million. Over the Martin Luther King, Jr. Weekend, it was able to pick up $7.4 million for the four-day, jumping up 12% from the previous weekend.

When Justin Timberlake was younger and learning to sing, he imitated various cartoon characters, and so came in with a prepared Boo-Boo voice.

Yogi Bear: The Video Game is a video game based on the 2010 film released for the Nintendo Wii and 3DS. Voices: Dan Aykroyd, Tom Virtue, Tom Cavanagh, T.J. Miller, and Eliza Jane Schneider.

Warner Home Video released the film on Blu-ray/DVD on March 22, 2011 in four versions:

A part two is in the works, and Jay Chandrasekhar has been chosen to direct.[17][18]

Yogi Bear is a soundtrack to the film of the same name, released under Warner Bros. Pictures The music of the film and this album are both credited to be composed and produced by American composer John Debney

All music is composed by John Debney.

Retrieved from "https://movies.fandom.com/wiki/Yogi_Bear?oldid=196336"
Community content is available under CC-BY-SA unless otherwise noted.