watch 00:59
The Loop (Movies)
Do you like this video?
Young Sherlock Holmes 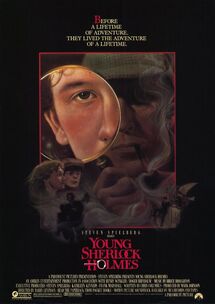 Teenagers Sherlock Holmes (Nicholas Rowe) and John Watson (Alan Cox) meet and become good friends as students at London's less-than-prestigious Brompton Academy. Watson is introduced to Holmes’ mentor, Rupert T. Waxflatter (Nigel Stock), a retired schoolmaster and inventor. Waxflatter's niece Elizabeth (Sophie Ward) is also Holmes’ close friend and love interest. Holmes is generally recognized as brilliant but considered an undisciplined troublemaker by most of the school administration. He is closest to Professor Rathe (Anthony Higgins), his fencing instructor, who warns Holmes that he is too emotional and impulsive.

Meanwhile, a hooded figure uses a blowpipe to shoot Bentley Bobster and Reverend Duncan Nesbitt with hallucinogenic thorns, causing the men to experience nightmarish hallucinations resulting in their death. Holmes suspects foul play but is rebuffed by Scotland Yard policeman Lestrade (Roger Ashton-Griffiths) when he suggests a connection between the deaths. Holmes is unjustly expelled from the Academy due a rival student's machinations. As Holmes reluctantly prepares to leave, Professor Waxflatter is shot with a hallucinogenic thorn and accidentally kills himself while trying to fend off imaginary gremlins. As Waxflatter dies he whispers the word "Eh-tar" to Holmes.

Holmes secretly meets with Watson and Elizabeth and begins his investigation of the murders. Piecing together the clues – a jingling-bell sound made by the killer, a piece of cloth, and the blowpipe dropped at Waxflatter's murder scene – the trio uncover the existence of Rame Tep, an ancient Egyptian cult of Osiris worshippers. The cult’s main weapons were blowpipes, used to shoot thorns dipped into a solution which cause the victim to experience realistic, nightmare-like hallucinations. They track the group to a London warehouse where the Rame Tep are conducting human sacrifices in a secret wooden pyramid. After interrupting one of their ceremonies, Holmes, Elizabeth and Watson are chased by the Rame Tep and shot with thorns, barely escaping with their lives.

The following evening, at Waxflatter’s loft, Holmes and Watson discover a picture of the three victims and a fourth man, Chester Cragwitch (Freddie Jones). However the three are discovered by Professor Rathe and the school nurse Mrs. Dribb (Susan Fleetwood) who prepare to expel Watson and Elizabeth in the morning. That night, while Elizabeth heads to Waxflatter's loft to salvage his work, Holmes and Watson locate Mr. Cragwitch who explains that in his youth he and the other men had discovered an underground pyramid of Rame Tep while planning to build a hotel in Egypt. Their find led to an angry uprising by the local populace which was violently put down by the British Army. A local boy named Eh-tar and his sister vowed revenge after their parents were killed. Cragwitch is then shot by a poisoned thorn and tries to kill Holmes, but the boys are rescued by Inspector Lestrade who reconsidered Holmes' advice after he himself was accidentally poisoned by the hallucinogen.

As they return to the school grounds, a chance remark by Watson causes Holmes to realize that Rathe is Eh-Tar, but he and Watson arrive too late to stop Rathe and Mrs. Dribb, who is revealed as Eh-Tar's sister, from abducting Elizabeth. Using Waxflatter’s self-propelled, heavier-than-air flying machine, they travel to the warehouse just in time to prevent Rathe from sacrificing Elizabeth, setting the cult's pyramid temple afire. As Rathe escapes with Elizabeth, Mrs Dribb is killed by her own hallucinogenic thorns in a fight with Holmes. Watson successfully thwarts Rathe’s escape by sabotaging his carriage. Rathe then tries to shoot Holmes, but Elizabeth intervenes and takes the shot instead. Enraged, Holmes duels Rathe and manages to get the better of him when Rathe falls through the frozen River Thames. Holmes returns to Elizabeth’s side and holds her as she dies.

Afterwards, as he exchanges goodbyes with Watson, Holmes explains how he figured out the identity of Rathe and Dribb, with Watson pointing out that "Rathe" is "Eh-Tar" spelled backwards – a clue that Holmes had failed to notice. As Holmes leaves by horse carriage, Watson expresses per voice-over (by his older, adult self reminiscing) that he would long for yet more adventures at Holmes' side. Some time later, Rathe is revealed to be alive; he checks himself into an Alpine inn as “Moriarty”, revealing him as Holmes' future arch-nemesis.

Allusions to other works[edit | edit source]

While the film is based on characters created by Sir Arthur Conan Doyle, the story is an original one penned by Chris Columbus. While he admitted that he was "very worried about offending some of the Holmes purists"[3] Columbus used the original Doyle stories as his guide.[3]

Of the creation of the film, Columbus stated:

""The thing that was most important to me was why Holmes became so cold and calculating, and why he was alone for the rest of his life," Mr. Columbus explains. "That's why he is so emotional in the film; as a youngster, he was ruled by emotion, he fell in love with the love of his life, and as a result of what happens in this film, he becomes the person he was later."[3]"
―{{{2}}}

The film is notable for including the first fully computer-generated photorealistic animated character, a knight composed of elements from a stained glass window.[4] This effect was the first CG character to be scanned and painted directly onto film using a laser.[4] The effect was created by Lucasfilm's John Lasseter[5] (now chief creative officer at Pixar Animation Studios and Walt Disney Animation Studios) before Pixar was sold the next year.[6] Lasseter would go on to create Toy Story 10 years later.

In the United Kingdom and Australia, the film was titled Young Sherlock Holmes and the Pyramid of Fear.[1]

The film music was composed and conducted by Bruce Broughton[7] who has a long-standing history of scoring orchestral film soundtracks. The music for the film was nominated for Grammy and also received a Saturn Award. The film soundtrack, released by MCA, was released on audio tape and vinyl but not compact disc. A limited edition of the entire score was released as a promo CD in 2003.

Limited edition tracklisting, with tracks on the original release in bold:

This is also one of only three Amblin Entertainment productions on which the logo is accompanied by the music composed for it by John Williams; the others are The Color Purple and The Money Pit.

The film was not a box office success, grossing around $19 million against an $8 million budget.[8]

The film received mixed to positive reviews, with a 65% on review aggregator Rotten Tomatoes.[9] Roger Ebert gave the film 3/4 stars[10] and Christopher Null of Filmcritic.com called the film "great fun".[11]

Reviewing the film for New York Times, Leslie Bennetts called it "a lighthearted murder mystery that weds Sir Arthur Conan Doyle to the kind of rollicking action-adventure that has made Steven Spielberg the most successful movie maker in the world".[3]

Pauline Kael wrote, "This sounds like a funnier, zestier piecure than it turns out to be.... As long as the movie stays within the conceits of the Holmesian legends, it's mildly, blandly amusing. But when one of the imperilled old men gives an elaborate account of the background of the villainy... your mind drifts and you lose the plot threads. And when the picture forsakes fog and coziness and the keenness of Holmes' intellect – when it starts turning him into a dashing action-adventure hero – the jig is up.... the movie lets you down with a thump when Holmes and his companions enter a wooden pyramid-temple hidden under the London streets.... There's a resounding hollowness at the center of this picture – Levinson's temple of doom".[12]

More recently, R.L. Shaffer writing for major internet review site IGN felt the film "doesn't hold up all that well"[13] and that ultimately "the film shall remain a cult classic – loved by some, but forgotten by most.",[13] while DVD Verdict stated that the film was both "a reimagining of the detective's origin story, but it is also respectful of Arthur Conan Doyle's work"[14] and "a joy from beginning to end."[14]

A video game based on the movie was released in 1987 for the MSX called Young Sherlock: The Legacy of Doyle released exclusively in Japan by Pack-In-Video. Although the game is based on the movie, the plot of the game had very little to do with the movie's story.

Retrieved from "https://movies.fandom.com/wiki/Young_Sherlock_Holmes?oldid=94797"
Community content is available under CC-BY-SA unless otherwise noted.