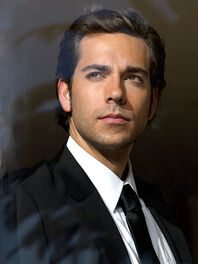 The middle child between two sisters, Zachary Levi was born September 29, 1980 in Lake Charles, Louisiana. He grew up all over the country before his family put down roots in Ventura County, California. At the early age of six, Zachary began acting, singing and dancing in school and local theater productions.

After graduating from Buena High School, he headed to Los Angeles to pursue his dream of acting. Zachary began acting in theater, performing roles in such regional productions like Grease, The Outsiders, Oliver, The Wizard of Oz and Big River. It was his portrayal of Jesus in Ojai's Godspell that brought him to the attention of Hollywood.

Levi first appeared in the FX television movie Big Shot: Confessions of a Campus Bookie. He played Kipp Steadman on the ABC sitcom Less Than Perfect. He also portrayed a potential boyfriend of Charisma Carpenter's character, Jane, in the ABC Family television movie See Jane Date. Levi was slated to be a lead in an ABC pilot called Three for the 2004/2005 television season.

He landed the starring role in Chuck in 2007. Levi and his Chuck co-star, Yvonne Strahovski, were both nominated for Best Action Actor and Actress Choice TV Series for the Teen Choice Awards 2010 where they both won and presented. He later starred in the film Alvin and the Chipmunks: The Squeakquel in the lead role as the Chipmunks' cousin Toby Seville. He stars alongside Mandy Moore in the 2010 Disney-animated feature film Tangled, which is based on the popular fairy tale Rapunzel. He voices Flynn Rider, a bandit who finds refuge in Rapunzel's tower.

In April 2010, Katharine McPhee released a preview of a music video to cinemas for her single "Terrified". Levi duets with her on the song (which was re-recorded; the original album version features Jason Reeves) and appears in the music video singing with McPhee. He is also featured on the soundtrack of the movie Tangled singing a duet with co-star Mandy Moore called "I See the Light", as well as being featured in the song "I've Got a Dream". In honor of the Oscar nomination for Best Original Song, Levi and Moore performed "I See the Light" at the 83rd Academy Awards.