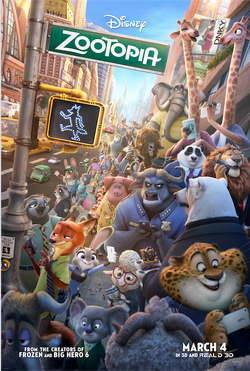 Zootopia premiered at the Brussels Animation Film Festival in Belgium on February 13, 2016, and went into general theatrical release in conventional 2D, Disney Digital 3-D, RealD 3D, and IMAX 3D formats in the United States on March 4. Critics praised its screenplay, animation, voice acting, and subject matter. It opened to record-breaking box offices in several countries, and earned a worldwide gross of over $1 billion, making it the fourth-highest-grossing film of 2016, the 34th-highest-grossing film of all time, the fourth animated film to pass $1 billion in global box-office earnings, and Walt Disney Animation Studios' highest-grossing film since 2013's Frozen. It earned numerous accolades, and received an Academy Award, Golden Globe, Critics' Choice Movie Award, and Annie Award for Best Animated Feature Film, as well as receiving a nomination for the BAFTA Award for Best Animated Film.

In a world populated by anthropomorphic mammals, rabbit Judy Hopps from rural Bunnyburrow fulfills her childhood dream of becoming a police officer in urban Zootopia. Despite being the academy valedictorian, Judy is delegated to parking duty by Chief Bogo, who doubts her potential because she is a rabbit. On her first day, she is hustled by a con artist fox duo, Nick Wilde and Finnick.

Judy abandons parking duty to arrest Duke Weaselton, a weasel who stole a bag of crocus bulbs known as Midnicampum holicithias. Bogo reprimands her, but an otter named Mrs. Otterton enters Bogo's office pleading for someone to find her husband Emmitt, one of fourteen predators who are missing. When Judy volunteers and Assistant Mayor Dawn Bellwether praises the assignment, Bogo has no choice but to let Judy take the case. He gives her 48 hours to find Emmitt Otterton on the condition that if she fails, she resigns.

Judy blackmails Nick into assisting her by covertly recording his confession to tax evasion, having ascertained from the 'last-sighting' photo of Otterton that Nick was the last to see him. They track Otterton to a limousine owned by crime boss Mr. Big, who reveals Otterton went "savage"—reverted to a feral state—and attacked his chauffeur Manchas. At his home, Manchas mentions Otterton yelled about "night howlers" before the attack. Moments later, Manchas himself turns savage and chases the pair. Judy saves Nick by trapping Manchas and calls the ZPD for help, but when they arrive, Manchas has vanished. Bogo demands that Judy turn in her badge, but Nick reminds Bogo that Judy still has ten hours to solve the case.

At City Hall, Bellwether offers Judy and Nick access to the city's traffic cameras. They discover Manchas was captured by wolves, who Judy surmises are the "night howlers". They locate the missing predators—all gone savage—imprisoned at Cliffside Asylum, where Mayor Leodore Lionheart hides them from the public while trying to determine the cause of their behavior. Lionheart and the asylum staff are arrested for false imprisonment and Bellwether becomes the new mayor.

Judy, praised for solving the case, has become friends with Nick and asks him to join the ZPD as her partner. However, she upsets him at a press conference by suggesting a predatory biological cause for the recent savage behavior; her comments also incite hateful speech and discrimination against predators throughout Zootopia. Feeling guilty for the results of her words, Judy quits her job and returns to Bunnyburrow.

Back home, Judy learns that the night howlers are actually the crocus bulbs Weaselton stole, and they contain a neurotoxin that has severe psychotropic effects on mammals, causing them to go savage. After returning to Zootopia and reconciling with Nick, the pair confront Weaselton, who (with a little persuasion from Mr. Big) tells them the bulbs he stole were for a ram named Doug. They find Doug in a laboratory hidden in the city subway, developing a drug made from night howlers, which he has been shooting at predators with a dart gun.

Judy and Nick obtain the serum as evidence, but before they can reach the ZPD, Bellwether confronts them in the Natural History Museum and takes the evidence, revealing herself as the mastermind behind a prey-supremacist conspiracy to frame predators as dangerous and savage. Bellwether traps Judy and Nick in an exhibition after Nick refuses to abandon an injured Judy. She shoots a serum pellet at Nick to make him kill Judy and summons the ZPD for help, but Judy and Nick have replaced the serum pellets in Bellwether's gun with blueberries. Enraged, Bellwether threatens to frame the pair for the attacks before discovering that Judy baited her into openly declaring her role in the attacks and recorded the confession with her recording device; Bellwether attempts to escape, only to find herself and her crooked group of cops surrounded by Chief Bogo and his loyal officers.

Lionheart publicly denies knowledge of Bellwether's plot and states that his imprisonment of the savage predators was a "wrong thing for the right reason". With the cause of the epidemic identified, the savage animals are cured and Judy rejoins the ZPD. Nick graduates from the Zootopia Police Academy as the city's first fox police officer and becomes Judy's partner. 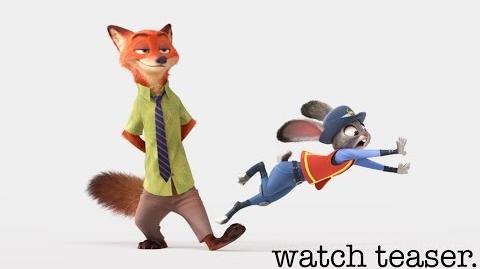 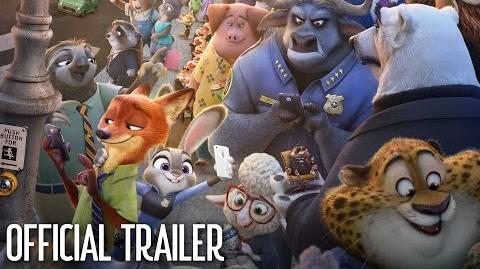 Zootopia Zootopia in References was 2016.

Retrieved from "https://movies.fandom.com/wiki/Zootopia?oldid=191482"
Community content is available under CC-BY-SA unless otherwise noted.